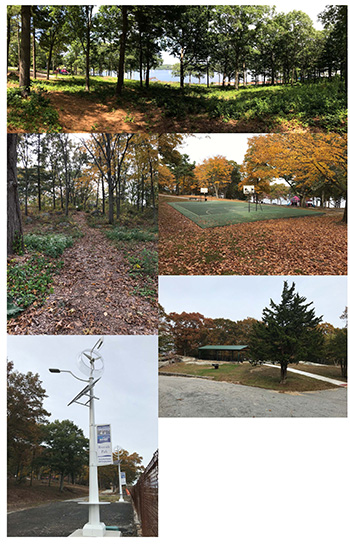 The Riverside Park property was given to the City in 1907. Throughout the 20th Century, it saw periods of active recreational use, as well as periods of decline. An article in The Day in July, 1968 summed this up well, stating that “The Park, which many persons do not even know exists, is a controversial area, having both its bad reputation and some of the greatest natural beauty of any section of New London.”

In 2018, City Public Works began a rejuvenation of the park using appropriated bond funds. The initial major effort was to clear and trim the massive amount of trees that had grown unchecked for dozens of years, blocking views of the river and creating a dark, foreboding aura to the property. Work progressed from the dense rows of trees on the tiny piece of land across the railroad tracks, in sections all the way to the upper layers of the park. The resulting feeling accentuates the natural distinct levels of the park’s topography, offers breathtaking views of the river, and gives the entire property a refreshingly open and inviting atmosphere.

The dangerous bathhouse on the lower level was removed, while the structure’s base was retained to accommodate a still to be determined public recreational format. The base of Adelaide Street was opened and sidewalk/handicapped vehicle access to the lower promenade was begun.

2020 will see design and construction of appropriate amenities to the lower promenade area, as well as installation of a gazebo in the middle level glade.